The Joys of Black and White

Saturdays have become my favorite TV night. There are some very good shows being written these days, but there's been good writing all along and it is a pleasure to discover some of it.

A Chicago station has been broadcasting episodes of some shows that were on when I was too young to be aware of them. MAVERICK is one of the best written westerns I've seen with it's wry wit and clever plots. HAVE GUN, WILL TRAVEL isn't as well written, but that may be a limitation of the half hour format. The character of Paladin, the gunfighter/knight errant is interesting. I've noticed that several of the writers who went on to STAR TREK got their start here.

I'm not as crazy about PETER GUNN but the jazz soundtracks they use are a lot of fun. The detective hero is played by Craig Stephens, who reminds me a little of Cary Grant and a little of Humphrey Bogart, but without the charisma of either. For my money Lola Albright as Gunn's long-suffering girlfriend and Hershel Bernardi as his tough cop friend are both more interesting. Frankly, Gunn loses a lot of points with me for the sexist and dismissive way he treats Albright's character (that's not political correctness talking, rude is just rude).

The other gem from the black and white era that local cable is offering right now it THE RIFLEMAN. The writing is solid and the direction is very good. (Sam Peckinpah got his start on this show before making a big name for himself in th emovies.) The plots are fairly standard for westerns but they're saved by the strong relationship between Lucas McCain and his son Mark.

I'd call it nostalgia, but I never saw any of these shows (except for a few episodes of The Rifleman) until recently. It's more like discovering forgotten treasure.
Posted by Matthew Baugh at 10:56 PM No comments:

I love the illustration from High Seas Cthulhu! It's similar to a scene from my story (though, it's probably also a scene from several stories in the collection. What could be more natural than Great Cthulhu taking on a sailing ship for a book with that title.

I'm less excited about the other cover. Don't get me wrong, its well executed, but I was hoping for cowboys or some such. It's heavy in the 'Cthulhu' and a little light on the 'frontier.'

Still, I'm really excited about both! 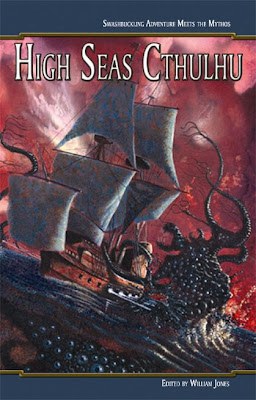 Posted by Matthew Baugh at 8:16 PM No comments:

I just heard that my story "Clown Fish" has officially made it into HIGH SEAS CTHULHU!

That be no bilge matey, arrr!

http://www.esp-books.com/shop/index.php?main_page=product_info&products_id=221
Posted by Matthew Baugh at 10:52 AM No comments:

I've been submitting mostly to anthologies to date and haven't cracked the professional magazine market. I recently sent "Trail of the Brujo" (Mysterious Dave again) to Weird Tales http://www.ralan.com/sfpro/listings/weirdtales.htm so I've got my fingers crossed. It's a revival of the great Weird Tales of the pulp era that gave people like Robert E. Howard, Seabury Quinn, and H.P. Lovecraft their start in writing. It would be a thrill to be published under that title.

I'm revising "Yasuke," which is my stab at old fashioned space opera, to sent to Intergalactic Medicine show http://www.intergalacticmedicineshow.com/cgi-bin/mag.cgi?do=content&article=submissions. It's a long story (9,000 + words) that was accepted to an anthology called "The Big Black II." Unfortunately that anthology went away when Rage Machine books folded.

There's a story a wrote a while back called "Horse Latitudes" inspired by the Jim Morrison poem. It's starts as an adventure story but moved to something unearthly and dreamlike. (I haven't done that before. I hope it comes across the way I want it to. There's a new anthology called Clockwork Phoenix http://www.clockworkphoenix.com/ this might be good for so I'll be polishing it for that.

Submitting stories is getting easier but I still have a big hollow feeling in my story every time i do it.
Posted by Matthew Baugh at 10:52 AM No comments:

I've been watching a VHS (yes, I'm still that primitive) of Disney's "Dr. Syn, Alias the Scarecrow" this week. I saw it at the drive-in when I was in grade school and loved it! It was a double feature with "Treasure Island" and (in my young eyes) blew Long John Silver away.

For one thing, Dr. Syn features a masked hero and I've always been a sucker for those. He's not just some good in a cape and mask either. The Scarecrow is weird, spooky, and impressive in a way very few masked characters are. The idea that this fearsome creature was a force for justice was inexpressably cool.

The other thing that really attracted me to the character was that he was a clergyman. Church was starting to be an important part of my life at that age and the combination of wise pastor and masked outlaw hero was a potent combination. I never questioned the idea that a minister could be motivated to put on a spooky costume and fight for justice. In some ways it made more sense than having a millionaire playboy of a bored caballero do the same thing.

It took me many years to track down the print stories that inspired the movie but I did. I was in graduate school before I found a novel by an American author named Buchanan titled CHRISTOPHER SYN. It was many more years before I ran across the series of novels by Russell Thorndike. These really filled out Syn's odd personality from his early years to his career as a pirate, to his dual career as vicar of Dymchurch and swashbuckling masked smuggler.

There are two other movies, both predating the Disney version. "Doctor Syn" (1937) tells the story of Syn's final days when his piratical past finally catches up to him. "Captain Clegg" (1962) is a remake of "Doctor Syn" with Peter Cushing replacing George Arliss in the title role. I've never seen the Arliss version but liked the Cushing version quite a bit. I've always enjoyed the actor's work. Still, for my money, Disney's movie is by far the best. It shows syn in the prime of life outwitting the King's men at every turn, and Partick McGoohan is perfect as the character. He projects the cool intellect and the core of decency perfectly. Dr. Syn is kind and mild, but you never doubt that he is a man of integrity. The Scarecrow is frightening, but we see a glimmer of mercy and compassion shine through his fierce guise.
Posted by Matthew Baugh at 4:40 PM No comments:

The First Doctor (William Hartnell)
19%
Posted by Matthew Baugh at 3:12 PM No comments:

Flying Under the Radar

William Jones has a contest for anyone who can figure the names/titles of everything in the new CTHULHU FRONTIER volume. I see that I'm one of two who no one has found yet. No wonder, even I can't find my blog using google. Maybe this will help...

I just heard from Ron Shiflet that my story "Decently and Quietly Dead" will be included in vol 2 of his magazine, "In Lovecraft's Shadow." Ron's a great guy and a talented writer. His stories stories I've read are fast paced adventure with a nice dollop of horror and a touch of humor. They have the same appeal for me as Robert E. Howard stories but they're not at all imitation Howard.

Anyway, the story puts Mysterious Dave against (surprise) another Lovecraftean horror. It seems that "Hanging Judge" Isaac Parker (a real old west figure http://en.wikipedia.org/wiki/Isaac_Parker ) is upset because a criminal he had hanged has the gall to escape after the execution. Dave has to bring him back in the judge's words, '...decently and quietly dead.'
Posted by Matthew Baugh at 11:15 AM No comments:

I've been watching a telenovella (basically a Spanish language soap opera) about Zorro for the last couple of months. From the point of view of action/adventure it's not great. (A Zorro story doesn't benefit from glacial pacing.) The fight scenes are awkward. They have some good stunt doubles but there's no sign that they have a fencing master and they film around the actors' limited moves.

The principal actors are pretty good, but it's the minor roles what shine. With the slow pace and the involved romantic complications you get to know the background characters pretty well. Don Alejandro does noble and fatherly very well. The sinister hunchback Olmos is a lot of fun, as is assistant evil guy Pizarro. My favorite though is Mariangel, the evil sister of the leading lady. They've introduced a touch of tragedy to her storyline, which should have made her more sympathetic. Ironically, making her more human makes her less fun. Before she seemed to be having such a good time being wicked that it was fun to watch. It was the sort of gleeful evil that made Vincent Price so much fun.

I'm glad it's a limited series, if the end weren't in sight I don't know if I'd have the stamina to see it through. Just the same, it's Zorro and I'm glad Telemundo decided to offer closed captioning in English.
Posted by Matthew Baugh at 6:30 PM No comments:

Jean-Marc Lofficier just posted the cover for TALES OF THE SHADOWMEN vol 4 on the Black Coats Press website. http://www.blackcoatpress.com/talesshadowmen04.htm

In addition to the story I mentioned earlier, he is including a flash fiction piece of mine. This is part of a series of flash stories by different authors build around a villainess named Madame Atomos. She is a sort of female Fu Manchu type created by French author André Caroff. Unlike so many Aisan supervillains who just wanted to rule the world, Madame Atomos had a more compelling motive. She was seeking revenge on the United States for the destruction of Niroshima and Nagasaki. http://www.coolfrenchcomics.com/atomos.htm My story reflects on the desire for revenge and what it does to a person.
Posted by Matthew Baugh at 9:26 AM No comments:

I just heard from William Jones that it's okay to mention that CTHULHU FRONTIERS is being released by Chaosium Press this month. (No link yet) This is a collection of horror in the grand tradition of H.P. Lovecraft set in the wild west. My story "Snake Oil" is going to be included in that and I'm very excited!

I've been writing weird westerns for a while now. Snake Oil will be the 4th story of Mysterious Dave Mather to see print. Dave was a historical gunfighter and a lawman in New Mexico and Kansas. http://en.wikipedia.org/wiki/Mysterious_Dave He was also a descendant of Cotton Mather, the Congregational minister famous for his involvement in the Salem Witch Trials. http://en.wikipedia.org/wiki/Cotton_Mather

I couldn't have created a character more perfect for this kind of story. He has come alive in my mind and I enjoy writing about him more than any other character.

The other thing I'm free to mention is that my story "Captain Future and the Lunar Peril" has been accepted in vol 4 of TALES OF THE SHADOWMEN which Black Coat Press will be putting out near the end of the year. It's my homage to the wonderful days of early SF when we knew very little about the solar system and anything was possible. As Douglas Adams said, "It was a time when men were real men, women were real women, and small furry creatures from Venus were real small furry creatures from Venus."
Posted by Matthew Baugh at 10:52 AM No comments: