My story got a mention in the SF Site revied of Low Noon. It's a mixed review but he has some nice things to say.

Children's author Mauricw Sendak died at 83 last Tuesday. My main memory of his books is encountering "Where the Wild Things Are" in first or second grade. It was both disturbing and fascinating to see Max meet the huge, terrifying monsters and become their king. My Mom said she could see why i liked the book because I was a wild thing myself (a lot of kids are at that age.) Sendak loved the "wild rumpus" side of children and thought that books that portrayed them as meek and innocent were dishonest. He once received a clever illustrated letter from a young fan and sent the child a personal response complete with his own original illustration. He got a reply from the boy's mother some time later saying that her son liked the drawing so much he had eaten it. For Sendak, there could be no higher praise.
Posted by Matthew Baugh at 9:41 AM No comments: 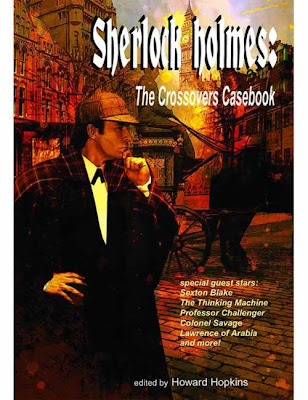 I got my copies of Sherlock Holmes, the Crossover Casebook today. This was the last book edited by Howard Hopkins before his untimely death and promises to be one of Moonstone's best volumes ever.

My story, "The Adventure of the Ethical Assassin" pits Holmes and Watson against characters from Jack London's The Assassinations Bureau, Ltd..

I'll hold off on recommending the other stories until I read them. Having seen the stories by Joe Gentile, Win Scott, Eckert, and Richard Dean Starr though, I can guarantee this volume is something special.

You can oder copies through Moonstone's website or at Amazon.com.
Posted by Matthew Baugh at 6:29 PM 2 comments:

I was out of town when I heard this news: Howard Hopkins, a writer and editor who I knew through his work with Moonstone. I was stunned to hear that he suffered a heart attack at the age of 50.

Howard was a talented writer and one of the best editors I've ever had. He was friendly and helpful but also uncompromising in what he asked for from writers. That is an amazing combination of qualities in an editor and helps writers to be their best.

Howard was a good guy and I wish I'd known him better. He leaves behind his wife, Dominique. Unfortunately, he also left behind some staggering medical bills.

At the request of Howard's wife, Dominique, Chuck Juzek has passed the following info along to the pulp fan community. Due to a mistake by their insurance agent 6 months ago that Dominique only became aware of after Howard's death, Howard's life insurance had lapsed at the time of his death. As a result, in addition to everything else that his passing means to her, she's now scrambling in order to find the funds to pay for his funeral expenses. If you have the ability, she's accepting donations to help pay for those expenses; at her request, below is her address for anyone that wishes to contribute.

I decided to try to find good homes for all my rejected stories (and a couple of new ones) for the new year.

"Draugr" has been sent to Dark Discoveries

"Closing Time at Galaxy Video" was sent to Apex

Finally, my mash-up novel The Vampire Count of Monte Cristo has gone to Permuted Press
Posted by Matthew Baugh at 1:55 PM No comments: