Movies Pt 3: The Book of Eli

This is, by far, the best of the movies I've seen recently. In a future where the earth is barren and only a few humans survive, a man names Eli (Denzel Washington) makes a pilgrinage across North America carrying a book. As it happens, a local warlord named Carnagie (Gary Oldman) has been looking for that same book and the power it can give him.

This feels a little like "The Road Warrior" and a little like "A Fist Full of Dollars" but it's not a copy of either. Eli is one of the smartest and best acted movies I've seen in a long time and explores the power of faith (both negative and positive) is some amazing ways. It's easily the best use of an explicitly religious theme I've seen at the movies in a long time. It's filled with clever twists and left me feeling deeply satisfied. I recommend it highly.
Posted by Matthew Baugh at 12:32 PM No comments:

The second movie I got to see was Avatar. I'd been hearing the pundits talk about being anti-American, anti-US military, anti-Christian, and anti-capitalism. It's funny to me that people can get so worked up over something as silly as a science fiction movie.

My take on the movie is that the theme is simplistic, but a worthy theme for all that. Basically the idea is that wealthy developed planets like earth, should take care when exploiting the natural resources of remote life-supporting moons. It's not nice to disrupt the eco-system or to trample on the rights of the 10 foot tall blue aliens.

The plot is familiar and this by Matt Bateman summarizes it better than I can. 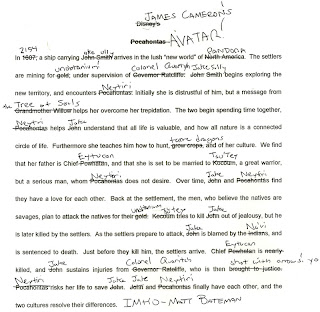 If I was a Marine I'd probably be a little annoyed at the portrayal of the military in the movie. Jake is one of many ex-Marines hired as mercenaries by the corporation and they are one dimensional villains (except for Jake and one helicoptor pilot, who rise to the level of two dimensional heroes). I can sympathize because I'm a minister and members of my profession are regularly portrayed as one dimensional villains also. Still, I don't think any of us should kick too hard. Like bad preachers, bad military types are easy to find in real life.

I don't believe this is a cheap shot at the military, though. The movie just needed some convenient villains for the big fight scene and Blackwater-type mercenaries fit the story logic. James Cameron's disturbing comment about being a fan of Eco-terrorism aside (I really hope he meant to say "eco-tourism"), the movie isn't very sinister. It reminds me a lot of "Starship Troopers" actually. This is a left-leaning movie and that one leaned to the right, but they're both ultimately harmless fun with dazzling special effects.

As for the effects, Pandora is dazzling and would be worth the price of admission even if there was no plot at all. The world and it's creatures takes your breath away.

(One odd note in closing: the animals of Pandora remind A LOT of the Martian animals in Edgar Rice Burroughs' John Carter of Mars series.)

Anyway, the plot and acting are so-so, but go for the scenery, and don't let silly ideological angst keep you away. This is an uncomplicated, fun movie.
Posted by Matthew Baugh at 11:10 AM No comments:

I had a chance to get to the movies several times in January. I don;'t do that much these days and it was a treat. Here are my thoughts about them, FWIW.

SHERLOCK HOLMES - I was ready to dislike this. I've been a fan of Sir Arthur Conan Doyle's detective since I read "A Scandal in Bohemia" in the sixth grade and had reservations about Holmes played as an action hero by an American actor.

As it turned out the screenplay was very clever and surprisingly true to the spirit of the original stories. There were some plot holes, but nothing glaring and the cast was excellent. Robert Downey Jr. is one of the best actors around. He picked up on both the brilliance and the troubled side of the character and made me believe. My only problem with him is that he doesn't look even remotely like Holmes is supposed to, but I can overlook that for a first rate performance. Jude Law was excellent as Dr. Watson, and the story worked, both as a self-contained story, and as the set up for a sequel.

I've heard that there is another Holmes film in the works with Sasha Baron Cohen as Holmes and Will Ferrell as Watson. I think I'd rather chew off my own foot than be trapped in a theater with that, but we'll see I suppose.
Posted by Matthew Baugh at 10:59 AM No comments: