An Order of Bacon to Go 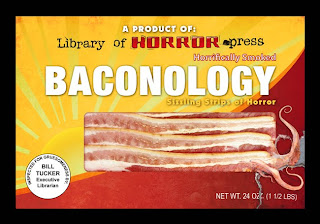 Everyone loves bacon; we serve it for breakfast, on top of our cheeseburgers, and even crumble it in our salads. At the same time, we know that bacon isn't very good for us. In fact, bacon can kill you.

If you have any doubt, Baconology: Fried Strips of Horror is now available from Amazon with a generous helping of bacon-themed horror stories. It includes my story, "The Un-Kosher Golem" about what happens when medical nanotechnology meets the deli counter and unleashed a monster of living bacon on the world.

Enjoy!
Posted by Matthew Baugh at 9:11 PM No comments:

I've had stories accepted at professional rates by anthologies before but never in a pro magazine. That changed this weekend when Daily Science Fiction decided to accept my flash fiction story, "Schroedinger's Outlaw."

What is it with vampires this week?

Doctor Omega and the Shadowmen is out, featuring stories of the eccentric French time and space taveller. This collection from Black Coat Press features new stories plus a number of reprints of Doctor Omega stories from Tales of the Shadowmen. One of these is "The Heart of the Moon", my story about the doctor and a motly crew of vampire hunters who travel to the vampire city of Selene.

In related news, I'm working on a Jed Puma story for Black Coats' French language imprint, Riviere Blanche. Jed Puma is a French comic book character from yesteryear who travels the Old West with his judo instructor, Tashi. Jed is a skilled martial artist and prides himself on never wearing a gin. My story teams him with Doc Holliday in pursuit of (you guessed it) a trio of vampire gunfighters.

I'm having a lot of fun working on the story and, whenever I finish a scene, I use google-translate to put it into French. Hopefully side by side English and French manuscripts will help the editors because this story is being published only in French.
Posted by Matthew Baugh at 3:25 AM No comments: