The estimable Matthew Carpenter who posts lots of reviews on Amazon has weighed in on Frontier Cthulhu. His review cam be viewed at http://tinyurl.com/2wkgv6 and scroll down the page a bit.

Here's what he had to say about my story:

"Snake Oil" - Matthew Baugh has been busy with stories in Arkham Tales,
High Seas Cthulhu (the excellent "Clownfish"), Hell's Hangmen and In
Lovecraft's Shadow issue #1. I wonder if Dave Mather, descendent of Cotton
Mather, will become a fixture in Mr. Baugh's stories? Dave Mather is a
deputy marshal in Nevada who gets mixed up in some mysterious goings on. As
you might surmise from the title, this is the Yiggiest story in the book.

(It's nice to be the Yiggiest)

One small correction. My story is set near Las Vegas, New Mexico. I think Mr. Carpenter (understandably) thought of Nevada when he saw the name.
Posted by Matthew Baugh at 6:26 PM No comments:

Looking at today's entries I see I should always do a spell check.

You can't go back and edit on this blog. :(
Posted by Matthew Baugh at 4:22 PM No comments: 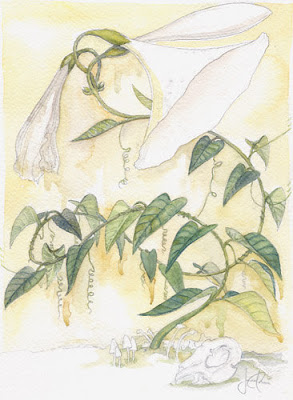 Here are a couple of gorgeous images from the upsoming "Handbook of Surreal Botany" coming out sometime this spring.

The flower to the left actually won't be in the book but artist Janet Chui posted it as an example.

I don't know the name of the fruit down beliw but it is amazing to look at (note to self: working with talented artists is good!)

My own contribution is the fire lily, whose bloom is actually a flame. I haven't seen it yet but am very excited! 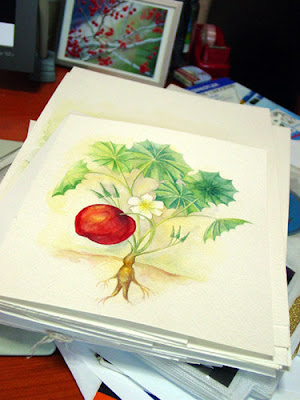 Posted by Matthew Baugh at 4:12 PM No comments:

I got to visit Las Vegas over Thanksgiving 2007. Not the Vegas you're probably thinking of though. This Las Vegas is situated in the mountains of Northern New Mexico and is filled with old west history.

My folks and I went doen for the day and I browsed the library for research on gunfghter days. We saw the building where Doc Holliday owned a saloon. We didn't get to see Doc's dentist office (Las Vegas was the last place he practiced as a dentist) but we did go by the Old Sytone Hotel. Jesse James stayed there once under the name of 'Mr. Howard.' He was looking for a place to settle when his bank robbing days ended. Billy the Kid can through the town as least once, and there's a story (probably invented) that Jesse took Billy to lunch and tried to talk him into coming back to Missouri to rob banks.

I've wanted to go there ever since I started to write stories about Mysterious Dave Mather.
Dave was a deputy in Las Vegas and his most famous adventures took place there. Sadly, the 'Close and Patterson's Variety Hall' where he fought and beat four desperate men in a gunfight is no longer in existence.

Still, it was great to walk those streets...
Posted by Matthew Baugh at 3:56 PM No comments: