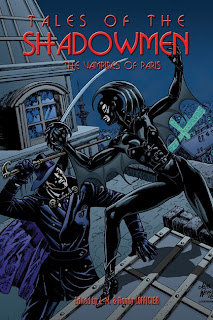 The latest in Jean-Marc Lofficier's anthology series, Tales of the Shadowmen will be out to the public in January, but I get to peek at a contributor's copy the week after Thanksgiving. (Yay!)

Jean-Marc's idea has been to tell new stories about the heroes of French popular culture that he grew up admiring. This includes very famous characters (D'Artagnian, The Phantom of th eOpera, etc.), reasonable well-known (Fantomas, Arsene Lupin, etc.) and obscure but fascinating (Fascinax, the Nyctalope, Irma Vep, etc.) Along the way a few British, American and others in th epublic domain may put in an apprearance.

The series has attracted some well known writers, including Brian Stableford, Kim Newman and Michael Moorcock, and has provided a place for obscure newbies like me as well. My first published story was "The Mask of the Monster" in TOTS volume 1. I've been fortunate enough to have a story in every volume since.

The latest outing features the following:

Matthew Baugh: The Way of the Crane
Michelle Bigot: The Tarot of the Shadowmen (an art portfolio depicting various heroes and an villains as the Major Arcana of the Tarot.)
Christopher Paul Carey & Win Scott Eckert: Iron and Bronze
G.L. Gick: Tros Must Be Crazy!
Micah Harris: May the Ground Not Consume Thee...
Tom Kane: The Knave of Diamonds
Lovern Kindzierski: Perils Over Paris
Rick Lai: All Predators Great and Small
Roman Leary: The Heart of a Man
Alain le Bussy: A Matter without Gravity
Jean-Marc Lofficier: Madame Atomos' Holidays
Randy Lofficier: The English Gentleman's Ball
Xavier Mauméjean: The Most Exciting Game
Jess Nevins: A Root That Beareth Gall and Worms
John Peel: The Dynamics of an Asteroid
Frank Schildiner: The Smoking Mirror
Stuart Shiffman: The Milkman Cometh
David L. Vineyard: The Jade Buddha
Brian Stableford: The Vampire in Paris (Part IV of The Empire of the Necromancers)

I saw this last night (seeing a movie the week it opens, or even the month it opens is a rare treat) and thought it was both good and bad.

I've had mixed feelings about Bond through my life. When i was an idealistic kid I saw the Sean Connery movies I hated them. it wasn't that they weren't exciting, but the heroes I loved made a point of not killing, and they were a lot nicer to the women in their lives too. (Well... couples like Superman and Lois Lane have their own version of a messed up relationships, but at least Superman didn't treat women like they were interchangable or disposable.)

The first Bond I really liked was Roger Moore, who seemed funnier and more charming than Connery (looking back, I wonder what I was thinking). Timothy Dalton did a decent job, though the movies were terrible. The Pierce Brosman films were fluff, but high quality fluff. The Daniel Craig Bonds are something else.

At some point in my college days I decided to read the original novels by Ian Fleming. I was surprised how much I disliked the character I found. Fleming's bond is not a nice man, not really even a good man. He is an efficient agent, a ruthless killer, a man who will use anyone or anything to accomplish his mission. He's not the sadistic monster that his ememies are, but Fleming had to create some real monsters to make 007 look good by comparison.

This dangerous aspect of Bond is something that Daniel Craig captures better than anyone else ever has. He is, as the last movie, CASINO ROYALE says, "a blunt instrument". He kills without hesitation or regret, and out of a grim sense of necessity. He womanizes in the same sort of way, effeciently seducing when it suits his purposes, or to seek solace from his inner demons (being a ruthless killer is hard on a person). This isn't a jaded hedonist, like Moore's Bond or even Connery's, there is a human killing machine with a vulnerable human core buried deep inside.

I like Craig's portrayal, and the cast in general. Bond's relationship with M (Judy Dench) is very nicely handled here and in the last movie. The plot is over-the-top in some wyas, but still grittier and more believable than any other Bond since the days of FROM RUSSIA WITH LOVE.

My biggest complanit were the action sequences. In what seems an attempt to keep them feeling gritty and real, the film uses a lot of quick cuts, unusual angles, and extreme close-up shots. Occasionally this works but usually it just creates a sense of condusion about who is doing what to whom.

There was a brilliant fight/chase scene in CASINO ROYALE which manages to combine over-the-top stunts with the strong sense that this could all be real. It was done with excellent stunt work rather than special effects and editing sleight of hand. By comparison the opening car chase, and the fight/chase with a rogue agent when the prisoner is freed are muddled and confusing. Gimmick has been allowed to overwhelm storytelling.

Still, thse are lapses in what is otherwise a well-written, well-acted movie. I enjoyed this one quite a bit.
Posted by Matthew Baugh at 12:41 PM 4 comments: 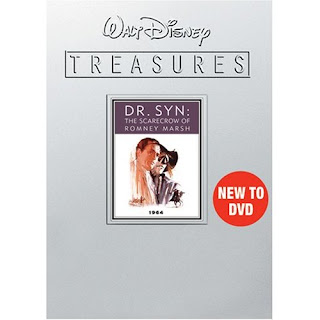 I just learned that tomorrow is the release date for Disney's new DVD release of "Doctor Syn, Alias the Scarecrow" which IMO is one of the best things the mouse has ever produced.

Doctor Syn is a favorite character of mine, an 18th century English clergyman who is the model of Christian love and charity by day. By night he dons a mask and dresses like a scarecrow to lead a band of smugglers. The two occupations aren't as different as they seem at first. The smuggling is to help the poor people of the marshlands of Kent who are being crushed by cruel taxes and victimized by press gangs who kidnap their young men to serve in the navy. Syn is appalled by this injustice and, as the Scarecrow, uses his wits rather than brute force to fight back.

It high adventure in the tradition of Zorro, but is much spookier. The Scarecrow costume is wonderfully creepy (hmm... I have a sudden inspiration for next Halloween!) and Patrick MacGoohan is perfect as both the gentle, intellectual parson, and the macabre Scarecrow.

This isn't just something I am a fan of. One of the extras tracks features an interview with MacGoohan, and I was lucky enough to suggest some of the questions used in the interview. I had written an article http://www.pjfarmer.com/woldnewton/Syn.htm a few years ago about the character as he was originally presented in the novels of Russell Thorndike (I've got a soft spot for masked avengers, and one who was a minister in his secret identity was irresistible)! As a result I became--maybe not an expert, but very familiar with the character. This led interviewer Larry Green (a very nice guy) to ask my opinion about a few things, and I leaped at the chance to help.

People think that knowing huge amounts of information about neat but obscure characters is a waste, but I am living proof that geekdom is good! :-)
Posted by Matthew Baugh at 12:37 AM 1 comment:

The Future is Dead

My story, "City of Masks" didn't make it into the anthology. :-(

No worries though, these things don't bother me.

(The fools! The blind fools! When will they understand? They will rue this day, I tell you! The time is coming when they will regret that they did not appreciate my genius, but then it will be... too late. Ah, I'm getting out of hand. Igor, bring me a sedagive.)

I have some ideas for improving the story, then it's off to a professional horror magazine with it.

In the meantime I'll be pulling for Bobbie and Rakie and a few other Permuted Press friends who made it past the first round.

I've got a few feelings about the election.

1. I'm excited about the fact that we've done something that would have been considered unthinkable when I was a kid. We've elected the first African American president ever!

2. While there are bound to be frustrations and disappointments ahead (there always are) I think we've chosen someone who will be an excellent leader.

3. Just a note, I'm celebrating Obama's victory, NOT McCain's defeat. I hope we can really come together and do some good. IMO good people can hold very different opinions and still find ways to work together for the common good.

4. For all it's flaws, the process of American democracy in action is awe-inspiring. I feel very proud.
Posted by Matthew Baugh at 12:46 AM 3 comments: