This is a fun time of year, when imaginations run wild and friends surprise and delight each other with costumes and spooky treats. My youngest nephew is going Trick or Treating as a banana. I love getting creative with costumes but have opted out this year (I'm getting over a nasty cold.)

But I do want to share a little teaser for something coming up soon.

It's a bigger than usual volume featuring more talented authors than usual, and the return of legendary fantasy writer Michael Moorcock to the Shadowmen anthology series!

My story Quest of the Vourdalaki is an especially Halloween-y theme. It features Cassave, from Jean Ray's surreal haunted house classic, Malpertuis, Cossacks, and vampires in a story inspired by one of my favorite pieces of music (which is also spookily appropriate for the day.

Have a safe and happy Hallowe'en!

Posted by Matthew Baugh at 6:37 PM No comments:

This is a big month, as my first two novels (both collaborations) to see print and I'm really excited! My collaboration with Win Scott Eckert is A Girl and Her Cat is now available for pre-order from Amazon (more in my next post.)

My other collaboration is The Vampire Count of Monte Cristo written with the amazing Alexandre Dumas. It's the tender story of Edmund Dantes, a young sailor in Napoleon era France with a promising career, a beloved father, and a beautiful fiancee. Of course, any time a story begins like that, you know there's got to be trouble. Edmond finds himself in a perfect storm as jealous enemies and a prosecutor with a guilty secret conspire to steal his love, his future, and his life. Locked in the dungeons of the dreaded Chateau D'if, Edmund encounters a mysterious man with occult skills and makes a dark pact with unholy powers to gain the power to become a creature of the night and seek his revenge.

Here's a first look at the cover: 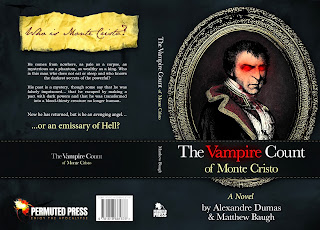 My co-writer, Alexandre Dumas, is excited too. Here's what he has to say.

This is an upcoming anthology set in the world of Clive Barker's novel CABAL. Bobbie Metevier and I collaborated on a story that we just sent in before the deadline.

The story is titled, "A Song to Sing in Babylon" and it was a lot of fun to write. The story has a lot of unusual inspirations, including a favorite old song by Don McLean. 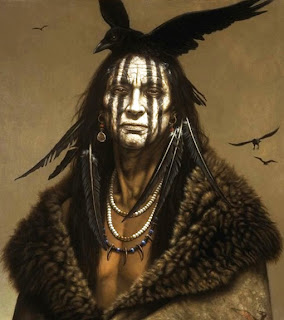 I saw this a few days ago and loved it. It's rare to find something that manages to be a nostalgic thrill and cutting edge entertainment at the same time. Into Darkness channels the spirit of the original Star Trek better than... well, better than just about anything since the original series. It also manages to combine the optimistic spirit of Gene Roddenberry with the darker and grittier tone that modern audiences demand. There's not a whole lot I can say without spoilers but if you're a newbie to Star Trek but like intelligently written, fast-paced SF adventure, you should like this. If you've seen the first of the new Star Trek reboot by J.J. Abrams you'll appreciate it more, and if you've seen the original series and the first few movies you'll appreciate it a lot more. The casting is perfect, the villains (and there are plenty of surprises about who the villains and allies are) are excellent. My only real reservation about Into Darkness is the same problem I had with Iron Man III, The Hobbit, and a lot of other blockbusters. The filmmakers are so in love with their digital FX that the characters and the story are overshadowed. Possibly worse, the long strings of impossible things that FX allow you to do makes the world, and the danger. seem much less real. In other words, the rollercoaster thrills can actually undermine the story. I'm looking forward to the day when directors decide that they've been overdoing it with the FX and pull back. Until then, movies like Into Darkness, that have solid storytelling and good characters as well as dazzling effects will are always welcome.
Posted by Matthew Baugh at 6:47 PM No comments:

Roaring Heart of the Crucible, Moonstone Books' third anthology of stories featuring the Avenger, is out. It's so new I haven't even had time to read my contributors' copy yet. My story, "The Iron Phantom", was a lot of fun to write, and includes the appearance of some other characters who I think will make fans of classic pulp adventures happy. More on this soon. 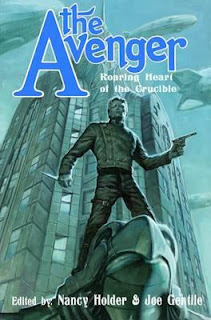 Posted by Matthew Baugh at 2:58 AM No comments: