A video by College Humor that can be appreciated by writers, editors, and Freedom Fighters everywhere. The Grammar Nazi division of the SS instills terror.

Correct English saves lives people!
Posted by Matthew Baugh at 2:41 AM No comments: 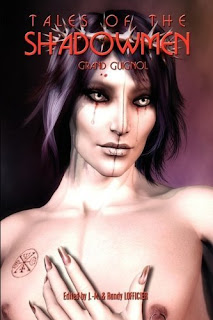 It has been too long since I updated anything here! This time (he said again) I will do my best to update things at least once per month.

Accepted but not yet out:
"The Inside Man" for Moonstone's GREEN HORNET CHRONICLES
"Trail of the Brujo" for TALES FROM THE CAULDRON
"Zorro and the Bruja" for MORE TALES OF ZORRO
"Invisible Empire" for THE AVENGER CHRONICLES II

Submitted:
"Adrift on Other Seas" for HIGH SEAS CTHULHU II
"The Cwoss-Time Twaveler" for TIMES OF TROUBLE
"The Adventure of the Ethical Assassin" for Moonstone's Sherlock Holmes Anthology

In Progress:
"Kumiho" for Moonstone's Kolchak, the Night Stalker Anthology
"Like Magic" for MORE TALES OF ZORRO
Posted by Matthew Baugh at 11:27 PM No comments: