The Monsters of American Politics 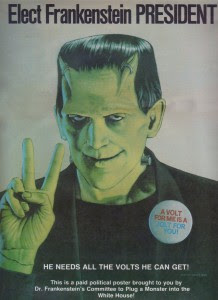 I've run across several articles recently that have looked at how monster movies help explain the US.

In a 2009 article, the San Diego Union News pointed out that the leection of Barack Obama coincided with a spate of vampires movies in the theaters. They also pointed out the high number of zombie movies made during the George W. Bush administration.

It's likely just coincidence, but maybe not. The writer points out that vampires might be the boogieman of the left, who fear the blood-sucking tactics of Wall Street, and zombies may frighten the right with the specter of an uprising of the undead hordes of the ravening poor descending on Washington.

On the other hand, this recent article from Cracked.com takes the opposite tack. It explains that the right fears vampires because they're immoral sexual deviants who want to drain the blood from capitalism, and the left fears zombies as mindless consumers who swarm after anyone who doesn't conform.

Could this be right? And if that's the case what about other monsters? Does liking werewolves mean you're a Libertarian? Are fans of the Creature from the Black Lagoon mean you're voting Green?

I'm a little worried. Does the fact that my favorite movie monster is King Kong mean that I'm a closet royalist???
Posted by Matthew Baugh at 12:23 PM No comments:

Maybe I'm still a boy of six at heart, but the question, "who would win a fight between . . ." has always fascinated me. That's why Deadliest Warrior quickly became one of my favorite shows. This show gathers a variety of experts to answer such classic questions as who would win a fight between a Viking and a Samurai, between a Comanche horseman and a Mongol warrior, between George Washington and Napoleon Boneparte. It is geek heaven!

DW just finished their third season with something different: Zombies vs. Vampires.

The show was a lot of fun and I LOVED seeing the scientific tests. I think they got the zombies (the slow kind, like you see in George Romero movies) exactly right. On the vampire side, they used the superhuman killing machines seen in 30 Days of Night. This worked well because it brought a modern version of the vampire to the fight.

In the show, Steve Niles, the creator of 30 Days, says:

The romantic vampire started in Bram Stoker's version of th ebook, and then Bela Lugosi came along turning the vampire into this sort of suave seducer and that's where vampires got stuck. When it came time for me to do 30 Days of Night, I just wanted to strip all that away. I looked at all the examples of vampires that I'[ve really enjoyed, like some of the Blade movies, where they were just treated as bad guys. What if they don't want to seduce you? What if we are just their food? And just that little twist makes then incredibly frightening.

I agree to a degree. He is right that Stoker, and then the movies, transformed the vampire into a romantic figure. Subsequent versions, like Barnabbus Collins in the soap opera Dark Shadows made the vampire into a romantic lead, and modern versions, like Twilight brought this to it's most absurd and sparkly extreme. I think Mr. Niles' insight that vampires are pure predators who only want us for our blood is a good one.

Where I part company with him is that his vampires are purely physical predators with razor sharp claws and rows of teeth like a shark. They use their strength, speed and ferocity to attack and kill humans the way an apex predator like a tiger would.

That sounds scary, but it also sounds a lot like a werewolf to me. I prefer a version of the vampire that acts less like this and more as an intelligent predator. It doesn't like to get into a physical conflict, and generally doesn't have to. Vampires have the perfect camofluage because they look like us until they open their mouthes. I think vampires should be seducors, not because they are interested in love or sex, but because we are. They use their intelligence, their appearance, and they may even have some sort of ability to fascinate a potential victim and draw them to an isolated spot where the kill can be made with a minimum of fuss.

But that doesn't detract from the show at all. Vampires won out, BTW, which is good with me. Whatever form they take (except sparkly) they are one of my favorite monsters.
Posted by Matthew Baugh at 11:43 AM 1 comment:

Tales From the Cauldron

I just ran across a final table of contents for Library of the Living Dead's long-awaited anthology of witch stories. There are a lot of writers I know in here, including former workshop buddies Anna Haney, Kody Boye, and Paula Stiles. Some others I know from the Permuted Press forum but have not yet had the pleasure of reading include Sheri Gambino and Patrick Rutagliano.

I am looking forward to this.

I just heard that my western/horror story "Damned PRetty Woman" has been accepted for the anthology THE TRIGGER REFLEX which is Vol 2 of Pill Hill Press' Monster Hunter Anthology.
Posted by Matthew Baugh at 8:40 AM No comments:

Tales of the Sahdowmen contents 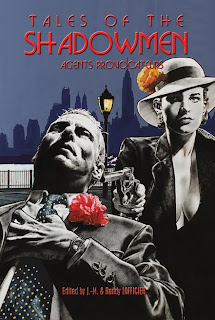 Black Coat Press has anounced the table of contents for Tales of the Shadowmen, Vol, 8, Agents Provocateirs

Gathered here in an all-new collection of amazing adventures are the terrifying Creature of Frankenstein and the monstrous Phantom of the Opera, the awesome Dracula and the Vampire Countess, the otherworldly Body Snatchers and the dead Necromancer of Averoigne, the merciless Madame Atomos and the deadly Countess Cagliostro, the Wandering Jew and the slithering Serpent-Men of Lemuria ...

With a special art portfolio by John Gallagher illustrating the Books of Shadows.

Posted by Matthew Baugh at 8:30 AM No comments: 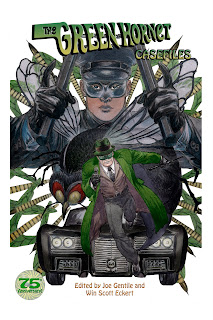 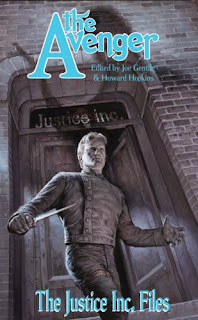 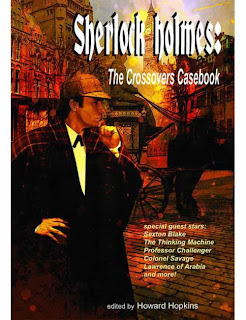 There are two new anthology titles out from Moonstone Books. The first is The Green Hornet Casefiles which is volume 2 of all new stories about the man who poses as a masked criminal to fight crime. Though the stories are based on the TV series, my entry picks up on a bit of trivia from the radio version of the character. Britt Reid (the Green Hornet) is a descendant of John Reid (the Lone Ranger). In "Auld Acquaintance" the Hornet is called on to help a descendant of the Lone Ranger's partner, Tonto.

The second book is The Avenger: The Justice Inc. Casebook is the second volume of stories about the pulp-era crimefighter with the dead face that can be molded into any disguise. The Avenger is notable among the old adventure pulps because it was one of the few that resisted negative stereotypes of African Americans. Two of the Avenger's assistants, Josh and Rosabel were depicted as being as smart and capable as any. My story "Invisible Empire" builds on this as the Avenger clashes with the Ku Klux Klan.

Though it's only available for pre-order, Sherlock Holmes, the Crossover Casebook can also be found at Amazon. This volume crosses over the great detective with a number of noted historical and literary characters. My story, "The Adventure of the Ethical Assassin" pits Holmes against Ivan Dragomilov, the head of The Assassination Bureau, Ltd. from the unfinished novel of the same name by Jack London.
Posted by Matthew Baugh at 7:38 AM No comments: