My sister Allison sent me this article asking about the longest running fictional character of all time. The writer has indeed stacked things in favor of Superman, and both comic books and newspaper comic strips seem to have a huge advantage in this kind of contest.

Still, the Phantom who was created in 1936 beats Superman out by several years, and (from reading the blog's responses) I see that people have pointed out that the characters in Gasoline Alley and Little Orphan Annie both trump the Man of Steel as well. Annie has been an orphan since 1924 and Gasoline Alley started publication in 1918. Even the relative newcomers Dick Tracy (1931) and Prince Valiant (1937) have maintained continuity for longer.

My first thought for the all time champion was Nick Carter an adventurer/detective whose published adventures began in 1886. Sadly, though Carter continued to appear regularly until 1990, the series ended at that time.

There has got to be some mention of the Hardy Boys and Nancy Drew. They have been teen detectives since 1927 and 1930 respectively.

I know that the article was really trying to make a point about the problems with allowing character series to continue for such long periods of time, but this has turned into a fun game.

I'm sure there are some I'm missing. Any suggestions?
Posted by Matthew Baugh at 2:52 PM No comments:

I just finished this novel by the amazing Christopher Moore. The full title is: Lamb: The Gospel According to Biff, Christ's Childhood Pal. I really like Moore. He is one of the funniest writers around and has the best titles of all time, my favorites being Island of the Sequined Love Nun, The Lust Lizard of Melancholy Cove, and The Stupidest Angel (The last is a heart-warming Christmas story with zombies).

Lamb is not a terribly orthodox (big surprise) retelling of the Gospel stories, nor is it strictly accurate from a historical point of view (another big surprise). Moore is well-known for his absurdism and goody sense of humor, and both are on full display here.

Levi, the son of Alpheus, aka 'Biff', Joshua (the name used for Jesus throughout the story) and Mary Magdalene aka "Maggie" are inseparable childhood friends. Biff is a natural con man with a heart of gold, Maggie is the smart, brave, pretty girl who both boys adore, and Joshua is the Son of God. It makes for an eventful childhood that is by turns touching, funny, and sad.

Childhood ends when Joshua and Biff decide they need to leave Judea to find the three wise men and learn what Josh needs to know about being the Messiah. It's a bizarre journey that takes them as far as the Shaolin Monastery in China, where Joshua learns kung fu and creates his own non-violent martial are of Jew-do. Finally the friends return to their home where they gather disciples, are reunited with Maggie, and run through the familiar events of the passion.

I put off reading this one because it's so hard to do a Jesus story well. People either tend to do pious rehashings of things that have been done a million times already, or else harsh debunkings that reveal shocking secrets.

Moore doesn't go in for either of those paths. He writes with a healthy disdain for conventional piety, but also with real affection. His Joshua is wise, loving and fearless, but far from omniscient. He makes mistakes, generally because he cares too much, but learns from them without ever becoming cynical. It's also refreshing to see someone having so much fun filling in the lost years of Jesus. Moore recognizes the absurdity of this kind of endeavor and uses it playfully.

It's not theologically earth-shaking (nor was it meant to be) but it's a good read, funny and fast moving with the occasional nice insight of affecting scene. I liked it better than any Jesus fiction I've seen in a long time.
Posted by Matthew Baugh at 10:25 AM No comments: 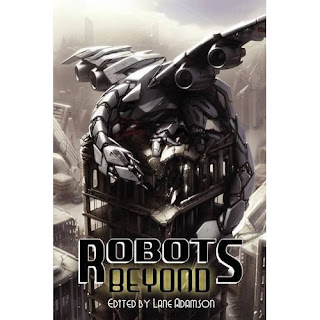 I got my copy of ROBOTS BEYOND in the mail! It's a great looking book and exciting to finally have in hand. I'm looking forward to reading it!
Posted by Matthew Baugh at 4:25 PM 2 comments: